The Witness and Mission of Father Raymond Gawronski, S.J.

In the final hours of April 14, 2016, God called Father Raymond Gawronski, S.J.from this life. Professor of Theology at Saint Patrick's in Menlo Park, he has also served on the faculty of Saint John Vianney Seminary in Denver and Marquette.  In both Menlo Park and Denver, he was involved in helping to initiate spiritual formation programs for new seminarians.


He told some important life stories during a television series on EWTN where he provided reflections on the spiritual exercises of Saint Ignatius.  Many of his reflections are now in a book published by Our Sunday Visitor, A Closer Walk with Christ: a personal Ignatian Retreat. Like many in the late sixties and early seventies, he went through a struggle to understand what his religion meant in the modern world. The son of a Polish concentration camp survivor, this New Yorker rediscovered his childhood faith as a taxi driver in Hawaii when another taxi driver asked him whether he had "met Jesus." He would eventually embrace a life of prayer as both a Jesuit and an aggregate monk of Mount Tabor Monastery in Ukiah, California.


My friendship with him began in Rome where he defended his dissertation on the dialogue between Christianity and Asian culture in the thought of Hans Urs von Balthasar.  This work is now published by Angelico Press as Word and Silence and I used it for many years as a textbook in spiritual theology because of its stunning polemic for Christian contemplative prayer and the wisdom of the saints.

After his successful defense, he went on to Poland to complete his formation in the Society of Jesus. It was a decisive moment of grace in his life when God gave him a mission to help renew the Church in America.  In the late 90s, this mission took a new turn when he worked with priests in the Archdiocese of Denver to offer the spiritual exercises of Saint Ignatius to the first cohort of the then newly initiated Spirituality Year for young men preparing to enter seminary. 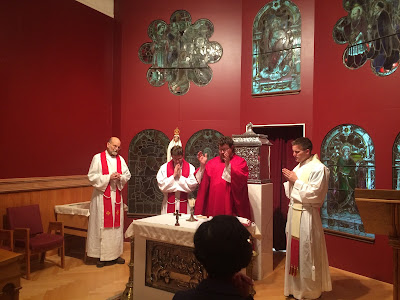 The presbyterate throughout the Rockies, the Heartland, the Southwest and California is stronger today because of his generous "fiat" to the will of God in his life. A brilliant theologian and obedient son of the Church, hundreds of seminarians and many others sought him out as spiritual director and retreat master who helped them encounter the Lord in life changing ways. As a Jesuit, his mission was on the frontiers of the Church's dialogue with Asian Culture and non-Christian religions.  As a man of poetry and art, he decried the tyranny of the culturally powerful and the spiritual vacuum that excessive reliance on technology has created in the modern heart.  As a priest, he advocated the piety of the people: pilgrimages, the rosary, the chaplet of divine mercy and, most of all, the Eucharist. As a monk, he was deeply devoted to Mary and to promoting the Heart of the Church in contemplative prayer.

While I will offer other reflections on this remarkable priest, today, I offer you a few of his own thoughts on the need to foster a deeper contemplative intellectuality in the Church:


"We live at the end of the so-called Christian ages. This end did not come overnight, and that which is called “Christian” was by no means definitive or exhaustive. It is hardly the end of Christian faith or life, which ends only with the Final Judgment and the restoration of all things in Christ. But the drama of salvation continues through our own apparently culturally destructive times.

We are called to know and love God above all, and to serve Him in the place and time where it has pleased Him to place us: this is the will of God for us, right where we are. Like the missionaries of all ages, we have to know and live in the Faith, and then know and understand the culture in which we find ourselves so that we can present the Gospel in a way that it can be heard.

Hans Urs von Balthasar held that the greatest tragedy to befall Christendom was the split between head and heart, between dogmatic and spiritual theology. We see the effects of that in the Church today, where a massive educational establishment yet fails to enliven the Church, where half-educated Catholics are unable to integrate their minds with their hearts, and the spiritual life becomes the matter of psychology and trendy spiritualities. At the heart of any renewal must be the experience of prayer: formation in a life of prayer. And at the heart of this is a silence that can hear God."

Throughout his final illness, he humbly accepted the will of God with peaceful resolve and good humor. He was sixty four. Now we commend Father Ray to the mercy of God as he journeys to the Father's House.