Fasting from the Media

Human freedom requires prayer and fasting. We should fast from everything that is against freedom. Let's face it: there is little real "free" speech or objective reporting in our news media. It is geared to excite insecurity to sell products and to manipulate social behavior. The more emotionally worked up we allow ourselves to be, the less we can rationally and freely discern how to live. There are some who are afraid of the freedom of the sons and daughters of God. They will do anything to dampen the love we share one with another. Rather than allowing ourselves to be dissipated by competing materialistic nihilisms, we should take strategic breaks from this influence. Fasting from food, drink and entertainment, we will find ourselves freer to turn to prayer. In such prayer lives the courage that freedom needs.

Acting primarily out of fear of death is a lack of faith. Although our enemies are not flesh and blood, we should not be surprised when the politically and culturally powerful treat truth and the liberty of the human heart as threats to security and order. They are simply under the irrational compulsions of fear, greed, and anger. Such drivenness is always self-destructive even when it is clung to out of a desire for stability and safety. Faith in the Risen Lord frees us from being driven by a fear of death. The Conquerer of Death protects our ability to live by reason. By the courage He gives in the face of death, we must discern every spirit and learn to renounce those that are against right reason.

The Discipline of the Christian Life

The discipline of the Christian life, the discipline of obedience to the Lord, is filled with blessings, fruitfulness, gifts and deepest meaning.  Pandemics, social upheaval, natural disasters, calamities and rumors of war do not excuse us the mission to share the Gospel of Christ but instead provide new occasions and opportunity to reveal the wisdom the Christian discipline commends. For the sake of the Church and the world, we need to make a new beginning in our faith. It is time to examine our hearts and renew the practices of our faith, taking them up with greater boldness and resolve.

This task even imposes on us a certain love and dedication to those whom Christ has given authority over us even when they seem to have fallen short of their responsibilities.  If we find in our hearts a certain resentment towards those who disappointed us in the Church, we must remind ourselves that it is never enough to condemn the apostles who abandoned, denied and betrayed the Lord. Indeed, how could these mysteries of our brokenness before God not be present now when they were present in the very shadow of the Cross?  Mary who stood with her Son when He faced that antithesis of all that was promised did not disdain the company of his disciples in their weakness but stood with them in their midst, praying and fasting with them in the Upper Room after the Resurrection and into Pentecost. Thus, against those who believe that prayer and fasting are optional or a threat to psychological health, we are bound to fast and pray out of love and concern for the shepherds whom Christ has placed over us, especially when we see their weakness and inadequacies. Only then can the obedience that we owe Christ Jesus be rendered in a way that gives Him glory.

Nor is stoking fear and judging the sincerity of our neighbor's faith acceptable to the Savior of the World. This does not mean silence in the face of injustice or evil. Instead, the Lord expects great courage and the willingness to take a stand come what come may.  We do this to save souls from the fires of hell - fires that often rage even in this world. And so often those we love are consumed in addictions, greed, cowardice, resentment, and self-hatred in ways that not only threaten their own dignity but also hurt everyone around them. When such hellfire is manifest in human affairs, Christ has authorized us to speak the truth with love. Such speech suffers being misunderstood, rejected and hated. But love endures all things and the discipline of the Christian life supports this endurance.

We must not allow an exaggerated pre-occupation with self-preservation and psychological health to distract us from a more meaningful life - a life given over to love, by love, and for love. Praying, fasting, keeping vigil through the night, reading the Scripture, doing penance, daily mass, and frequent confession - I do not know a saint who did not embrace these practices. This is not self-destructive behavior but instead a pathway to true love of self. For these practices orient us toward giving ourselves in love to God and neighbor. They free us from self-indulgence and self-occupation. I have found this especially true with praying the Rosary and the Psalter. If done right, they order our hearts to greater and more noble things - truths that lift us up above ourselves rather than drown us in self-concern.

Extended prayer and frequent fasting protect us against bitterness, resentment and vengeance. I notice that these can bring out some irritability in me but this becomes the very stuff of humility if I let it. I cannot speak to any exalted state of consciousness in this. Instead, confession and penance become a school of humble acceptance of my weakness and of finding the courage of Christ when my own strength has failed. By putting us in touch with our own weakness and need for God, the struggles we confront in prayer and fasting dispose us to forgive, to have compassion, and to seek forgiveness.  Filled with compassion, we learn to pray for our enemies rather than call down hell-fire on them. We find the courage to listen to the heart of our neighbor, especially if they are children or parents. We more readily recognize our own tendency to pre-judge as driven by our own shame, inability to take responsibility for our own actions, and our need to self-justify. As did our Crucified God, we must bear with one another patiently and persevere in love, even when with this means humbling ourselves unto death.  Preserving true peace with one another requires implicating ourselves in one another's plight, even at our own expense.

A Journey Down Apparition Hill 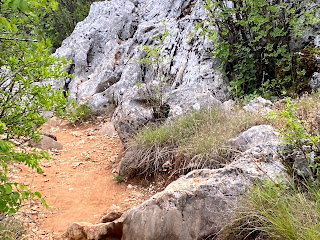 A burning draws barefoot pilgrims to
A bush aflame but unconsumed.
In deepest center, in central height,
Away from earthly cares, out of empty voids:
Only unshod do steps off inadequacy’s edge
Lead into those whispers of silent stillnesses,
Where Meaning freely searches the heart.

An ache compels them down closer.

Held to breast the Word moves and
Rests that knowing twinkle in searching glance
With mixed sorrow, sweetness, and dancing joy
At the sight, hoping to catch the attention,
If for a fleeting moment,
Of the pilgrims plodding down the rocky fastness.
Under the canticles of maternal counsels, visions, dreams;
He babbles eternity in frail finitudes, a stammering brook
Of Divine Fingertip touched signs and symbols.
This yet unrecognized love
vindicates, rebuilds what men destroyed.

The further down a disciple falls, the nearer he dares -

Nearer down he must.

So close, he dares down nearer still.

Into such shell shocked emptiness, entombed
All else in His unrequited love for me, for man, for you pilgrim -
Eternal Word ablaze in Uncreated Fire. Enfleshed -
Who has born such separation of body and soul?
Drawing, bellowing, moving deeper still
Into what Life harrowed Hell
A pilgrim has yet to know - His Crucified love
In him flies, races, walks, falls, crawls and he crawls

He slides down further.

For failure, void, catastrophe do not exhaust
Mercy’s unsounded depths. Buried there,
A pilgrim dares drink to the dregs
His unquenchable thirst,
And hears echoed in his own heart that virginal  “Fiat”,
And welcomes anew that maternal question,
And makes his own that irresistible Magnificat,
And tastes the very substance of hope.

A burning heart compels him deeper.

Heart-pierced with her, compelled, finally free
Traversing, flying, running, walking, falling, crawling
That royal highway unknown to unaided eye
To chance upon, to stumble into, to discover
that wall, that rampart, that impenetrable frontier
that no evil passes beyond - but wherein lies
The homeland of his heart, that sacred ground,
That fertile soil smiling on us even in death -
To gain for his brothers, his sisters, his friends,
For you, for Him whose suffering love
Even at this late hour rushes in us
Towards yet unexplored and endless seas.

In this hidden mountain, in secret garden’s center
Eternally begotten Meaning
Begets in him life not his own.
Womb conceiving and conceived Word
Conceives in his heart words not his own.
Words not of sounds and syllable, but purpose and resolve.
God's body, the birth of Un-circumscribed Truth
Embodies faith's sojourner and his body is not his own:
Does Life’s wounded hand wave him still closer?
Is it instead the discrete and urgent hand of a mother?
Still the disciple's heart aches to be nearer.
Humbled in the mud
Of blood and water, knees fasting find
The blue Portal in which misery meets its limit,
A still point in the cycle of human affairs,
A sin bearing boundary.
Bitterness passes away but the Gate of Heaven remains -
Suffering souls into the Heart of the Father
By love refined, in love alive, in love to die -
Surrendering to such Uncreated Love
Who cannot release a heart’s
Scorned captives and bitter debts?
Though we die a thousand deaths, Love’s ache beckons
Near beyond all nearness.
O Dawning Horizon of New Life
Whose glance of goodness makes all things new!
Such splendors as evoke awe spill through your windows,
In radiant songs and dancing hues, crystal clear torrents
Of tears and joy, reflecting flashes of terrible tendernesses
By which alone history’s true currents shine
With thundering tapestries of life and love,
Sprung from yet deeper down bottomlessness,
No one knew moved with such un-vanquished force,
In that Father’s Heart at journey’s end.
Posted by Anthony Lilles No comments: