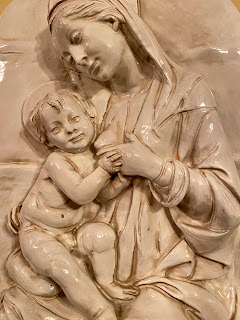 The Christmas Mystery is humanity's great new beginning, the sure orientation point for all history and each one's life, the pathway out of social and personal chaos, and the threshold into such tender harmonies as heal hearts and unleash untapped potential. If by the envy of the devil an obstacle thwarted the holiness that men and women were meant to know together, the love of this newborn has changed everything, forging a way to even deeper communion.  If in weakness and ignorance we turned from confidence in the goodness of God under the power of a seductive enchantment, the trust that this Child places in us helps us find our way again on the solid ground of truth. If unmet needs and bitterness threaten to swallow all that is good and noble with despair, the vulnerability of this Babe unveils the Lord's undaunted hope in those He created in His Image and Likeness Boorishness is buried when Christ comes forth from the womb!  Nihilism's darkness is destroyed when the Word made flesh cries out in the night. The truth confronts deceit. A new harmony takes up all discordance. In a sudden crescendo the Cosmos has never heard before (faith comes by hearing), in the murmurs of a sleeping newborn, there rings out that new echo of the inexhaustible Mystery from which all things come. It is the great canticle of life and love, the unheard eternal anthem  drawing all things to their great purpose. Creatures are taken by the gravity of a mercy excessive beyond all imaginings and wonder fills this tired out world - this living death discovers new life, and cannot be the same again. By the birth of God in our human poverty, even when the Word as not yet learned to speak, such unfathomed divine riches flow at last into hearts broken enough to welcome Him!

That disturbing consolation that confirms identity and reveals mission

When the Angel Gabriel appeared to Mary, His greeting disturbed her and his explanation consoled her. Contemplative prayer unfolds in that polarity of divine disturbance and sacred comfort.  Whether disturbing or comforting, every encounter with the Holy One always communicates identity and purpose, the truth about oneself and the mission that God has in store.  The angel spoke his greeting and Mary was disturbed. The angel rushed to reassure her and unveiled God's eternal plan. In this disturbance and reassurance, Mary offered her generous obedience - the great "fiat" that opened wide the doors of humanity to the Redeemer.

Angelic beings are more powerful than space and time in this world. Their presence orients space and they do not travel through time as much as time travels through them.  When the angel appeared to Mary, the place had come into the angel's orientation so that he might be seen by her. The moment had rushed into his presence until she was ready to receive the greetings he bore her.

His message was not his own, but from the Most High God. He had received it in the moment that he was created because in the moment, he was given freedom to choose to be its bearer.  He knew of the handmaid though she was not yet created because the Lord imparted His own knowledge of this virgin to him. And Gabriel loved her and all humanity with her - because he saw how much God cherished humanity in all its weakness and poverty. He contemplated her in God and discovered her to be in her very lowliness most highly favored.  To speak and appear to the lowly, one must allow lowliness to enter one's own being.  So it was the the mighty angel welcomed the lowliness of the time and space in which he would find the one he knew to be full of grace.

When the unfolding of God's plan brought to completeness the movements of all creation, her eyes were open to this angelic presence - fierce, unworldly, and unsettling as it was.  He had waited for time to reach the fullness of this moment in him and, aware that our frailty cannot bear the unveiled glory of God, he poured out his heart with that tender gentleness that alone can offer those deep secrets that live in our existence. For there are truths about ourselves that we do not know and only someone who truly loves us can help us find the mission for which we were made.  The words of an angel lifted up that sacred, tender and transforming moment, a moment in which the moment of all new beginnings find their source!  Something new had been born in what disturbed and reassured the Virgin's heart and she found the freedom to magnify the Lord in a way the world had never known before.