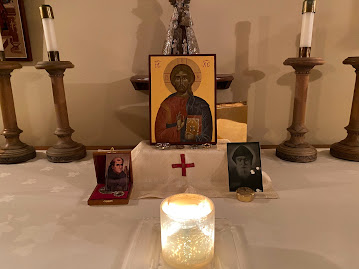 Christmas is a special holy day. Normally, on holy days, there is one mass that is celebrated.  Three masses are celebrated for Christmas - at Midnight, at first light and for the rest of the day.  Each of these masses celebrates a sacred characteristic of the Christmas light.

At Midnight, the Christmas light celebrated in the liturgy is brighter than day in the dark of night and filled with angles and their songs. Thus, we celebrate the Mass of the Angels. It is that primordial and undimmed radiance shining above the world's darkness from before the sun and the moon, on the first day of creation. This angelic light shows shepherds the way to the Messiah and evokes the gift of faith.

At Dawn, the Christmas light celebrated in the liturgy is a new morning glory. It is the first light of day and under these rays those tending flocks beheld with human eyes the saving wonder heralded by heaven. Thus, we celebrate the Mass of the Shepherds.  The brightness of this new beginning is the only newness the tired out cycles of historical life have ever known. These cycles are subject to death. But this light reveals salvation has begun. Wrapped up in the swaddling clothes of a visible existence, First Truth babbles in humanity at last. It is the sacred truth that dawns in the chaos of the world to bring hope.

In the Day, the Christmas light celebrated in the liturgy is a glory that the powers of darkness cannot defeat. Thus we celebrate the Mass of the Nations. In this liturgy, our hearts are filled with a victorious and sovereign light of peace, a light that no darkness can overcome, the light of eternal life. This unending light awaits us in the world to come but it also shines even now whenever we dare to love for the sake of God.

The Word and Silence

Though unaided reason is ignorant of His presence, God has never been indifferent to the plight of even the least of His creatures. He is always at work on their behalf. That is why we find Him throughout the Scriptures searching in the world's silences and poverties as a shepherd seeks out lost sheep in a wilderness or a father his lost son.

The Living God implicates Himself in the misery of the most forgotten, overlooked and rejected until He too is rejected, overlooked and forgotten. He is not disgusted with his children when they cry to Him no matter how lost they are. He eagerly takes them home and embraces the consequences of their sins, suffering them with the wisdom that knows that evil is not without limits. Love goes farther than hatred, lasts longer than resentment and bitterness. Love heals what we have destroyed.

Such a pathway involves humiliation in the short run and in the exigency of the moment looks as certain defeat. But God's love is never defeated. In the pure excess of His love, God chooses the humiliated and the humble even to the point of his own humiliation and death. But His love is stronger than death and the chaos of Hell has no hold on this Light. So He raises up those who are bowed down and refreshes them for the great journey home. The humble "yes" of those who choose to serve Him leads to all this and more. The object of his Divine Affection, these are the souls who He invites into even deeper silences, spacious places that the world cannot know, nights so dark that they alone can hold a light brighter than day.

For those who choose to trust Him, He invites them to go where no creature has ever gone before. He makes this invitation by entrusting to them His Son. The invitation is by way of faith, the decision to believe when this choice seems most difficult to make. This is because trust alone welcomes God and trust only becomes strong when it is tested. The Word comes to those who will welcome him in times of trial and hardship - He sees the strength of His Father in them, and this delights His heart. He comes in the vulnerability of a baby. He comes as the pure gift of the Father for no other reason than love and love alone.

Into the silence of the world, the Father has spoken his Word.  Into humanity's deepest silence, the Word entered and resounded.  That deepest silence was in the form of "let it be done to me." It is not only a silence of soul but also a silence of body, a taking flesh in a loving womb because so perfectly held in a humble heart. Sin does not know this silence but through this silence the Word communicates power to overcome sin. This same power waits to be enfleshed in our own lives too - a transformation in light and love.

St. Nicholas and the Byzantine Monks of Northern California 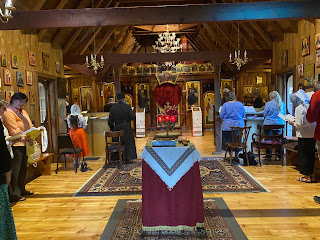 One of my favorite churches is the Temple of St. Nicholas at Holy Transfiguration Monastery in Redwood Valley, California. The Byzantine Monastery was founded by Abbot Boniface Luykx, a Norbertine who participated as a periti at Vatican II. He was convinced that the Church needed to recover the riches of the East so he began to found Ukrainian monasteries first in Africa and then here in America.

I made a retreat at this beautiful place of prayer in Advent of 1988. The chanting and the silence, the icons and the forest, the fasting and the joy all live in my heart this many years later. Most of all, the bells calling us to prayer, ringing out through the valley, reminding the heart of resonances beyond this world. I remember the powerful conversation that I had with the Abbot. I remember also the witness of the monks - their dedication, perseverance, authentic joy.

Just as has been the case in so many communities, the monastery went through many difficult trials. Even still, Fr. Raymond Gawronski, so instrumental in building up the spirituality year in Denver and laying out the vision for a spiritual formation program at St. Patrick's in Menlo Park, joined the monastery and found in its way of life an island of humanity.  Notwithstanding natural and supernatural hardships, the community is dedicated to drawing close to the Lord and to conversion of life.  The rhythm of silence and intense liturgy is challenging and refreshing at the same time.  The monastery chapel, called the Temple of St. Nicholas, is at the very center of this holy work for God. 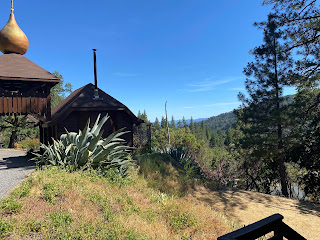 That this space should be dedicated to St. Nicholas is fitting. This saint was a man above all who encountered the Lord in a world that was hostile to the faith.  The monks of Mt. Tabor also live by this encounter in historical and cultural circumstances not unlike those of the saint. Though he lived very simply in self-imposed poverty, St. Nicholas was known to be a very generous man and a giver of secret gifts to those most in need. This spirit lives in the monastery where souls come with all kinds of poverty to find the riches of Christ.  The monks, as did the saint, live dedicated to conversion from sin, rigorous asceticism and kindness to others. This attracts young men who want something other than a meaningless and indulgent life. If St. Nicholas was noted for his loving concern for those entrusted to his pastoral care, so too the monks of Mt. Tabor who provide a refuge for those needing shelter from the fire storm of secularism raging in our time. 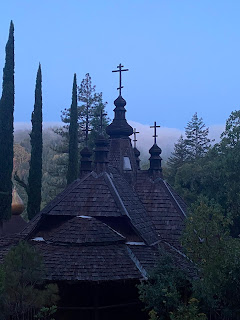 We need places of refuge and prayer, sacred places of healing and holiness to put us in touch with the truths to which St. Nicholas witnessed. If the monastery protects a great truth about living out our faith through dedication to the praise of God, St. Nicholas was a man of deep prayer who safeguarded the truth of the faith with courage. If the monks are dedicated to dying to themselves out of devotion to Christ, the presence of St. Nicholas in their midst reminds them that the love of God is more powerful than death.

There are many stories of St. Nicholas coming to the aid of the poor in his own lifetime even raising from death those who suffered under great evil. Among the monks, there are men who also have been raised up by Christ to begin the discipline of the Christian life anew.  After his death, the number of miracles attributed to him confirmed that St. Nicholas was a wonder-worker for the whole Church. Mt. Tabor also is a place of miracles where the veil of our Lady protects souls in peril.