Mysterious Currents of the Trinity

The journey out of self and into God is long and arduous. This pathway traverses a bottomless abyss, and we row along unaware of the doom that threatens beneath us. Progress is measured only by a greater freedom to love - for only in love is the truth of our lives unfurled. The One God is not indifferent to our plight but will not force us as we make our way. Yet, His long forgotten love is the ocean on which we sail. So He subtly draws us with Love's own dynamism until we believe and choose to set our course by His voice. 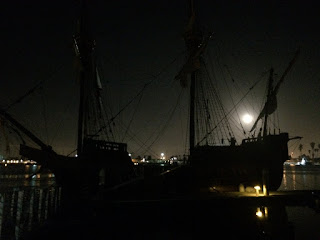 The Lord is motivated only by His desire that we should not perish but instead come to know Him in the deepest and most personal way. In this excelling knowledge, eternal Friendship Himself offers the astonishing promise of true friendship. In the face of this tender and sincere offer, we discover our poverty: that deep dark hostility to God and the things of God. This abyss of death pulls at us and threatens to imprison us until nothing good, noble or true about our lives is alive at all. To be trapped in our own ego - this is to be already dead. Only the freedom to love beyond ourselves allows us to live. Here, before the mystery of death where our voids and inadequacies make themselves felt, we also discover grace.

We ask for help because this gift has evoked our prayer - that gift of new life won for us by Christ's passion and death. It is grace that enables us to struggle against our hostility to God. By sheer grace, we find that steep passage out of the prison of our own ego and into those open seas on which alone freedom to love is found.

If we think we are doing all the work because of the determination and perseverance the freedom to love demands, we are mistaken. All the trials, hardships, sacrifices and renunciations that love requires are only a frail response to a greater love already lavished on us. The Father carefully draws us by His Word and the Gift of the Holy Spirit into this hidden mystery. If we are timid and not confident in the immensity of His love, the Holy Spirit engenders a new confidence and the Word not only reveals why we should be confident in the Father, but communicates His own confidence in us, the confidence of a child of God.

So, the Trinity is patient and gentle, accomplishing the most delicate work even in our inconstancy and lukewarmness. We avoid, we delay, we put off. He waits, He runs, He embraces. With longing expectation, He orders events, even making use of catastrophes, so that, though we are unaware, we will suddenly find ourselves implicated in His love. Such are the deep currents of the Holy Trinity.

We set out on a peaceful sea and believe we have found peace until unexpected mighty swells take us under into depths we did not know existed - abysses deeper than death. We would never have desired to go into such difficult places, and yet our faith helps us realize that somehow this present heartbreak is good though that goodness seems hidden from our sight. Yet we believe -- for in these depths are found the heights of God's love - its length and breadth - cruciform dimensions too great for this frail world to hold.  And only here are we at last at rest in that peace for which we were made.

What a paradox - the Trinity takes away a certain peace that we thought we held secure to give another, more wonderful peace. He Himself holds us safe in this quiet stillness with an assurance more sure than death itself. For in these mysterious currents of the Holy Trinity, love's freedom fully lives.
Posted by Anthony Lilles 1 comment:

The Radiance of the Bride - Source of Contemplative Prayer

The world may fear Fire from above, but not the Bride of Christ. For her, this Eternal Flame flashes down as torchlit sign of hope in the present moment - infusing the difficult circumstances that threaten humanity with those possibilities that eyes still subject to death cannot see. Hearts not satisfied with a half-lived life, not ready to settle for anything other than the truly authentic, need this source of contemplative prayer.  The radiance of the Bride comes from Heaven as a pure gift, and she shines with this resplendent peace precisely for those longing for the rushing stillness of a truly meaningful life.

The Church possesses the Light which contemplation seeks. As a dark cloud of accusing fingers rush forward claiming victim status in social myths indifferent to the innocent, the gentle dignity of truth remains the uncompromising standard of her heart, the only ground that she allows to bear her weight and the weight of that encounter for which she longs. Woe to those who preach another standard in her name and claim that such darkness is light- their myths entrap in self-contradiction putting at risk one's integrity and dignity.

All that is not chaste, simple, and obedient under the Light of the Church fails to find the footing that she offers. Sensational controversy, intrigue, and political maneuvering remain ignorant of even the passing shadow of her Great Mystery.  Calculated spin, social stratagems, and clever agendas can never access her deepest treasures. Instead, only a heart surrendered in truth to love can know that Surrender into which she has surrendered herself. Only a mind whose every thought is held captive by the ignominy of the Cross can know that unfamiliar brightness whose wound heals.

The Church is captivated and captivates by the uncreated Light unveiled in the suffering and risen humanity of the Lord. The Bride of Christ, in the warm radiance of this mysterious splendor, silently processes forward to Him who awaits her. She presses on in trust and confidence through the deep currents of humanity's doom, carrying a candle lit in the darkness of the world by that flaming Word who would not be dimmed.  He is the way - the way for humanity as a whole, and the way for each heart to whom He calls.

Illuminating this pathway for humanity, the Bride's faithful shadow discloses a true alternative to all social and psychological idealisms of our time. Her light is her own - it is Him, the Light - not a light of our time, but Eternal Light. Nihilisms of contemporary conventions, deprived of the Light that shines in the darkness, never lead out of the dark, no matter the supposed nobility of their cause. In the end, they betray, in slanted labyrinths of twisted thought, those enclosed in concentric circles of egoism.  Even here, if a heart will strive to seek Him, Christ's raised Lantern provides an escape. For she knows these dark prisons whom her Bridegroom harrowed and her pathway to Him takes her through those barred gates and locked doors - for nothing is denied her as she follows the footsteps of her Crucified Master.

In her maternal brightness, all that is good, noble and true about holy humanity is set aglow even if largely unrecognized save by some mysterious relief, if only momentary, from the ennui haunting the secure routines of a half lived life. Immaculate and holy by the Blood shed for her she shines. Though ravenous wolves violently tear at her to devour her children and render her fruitless, the brightness of her Shepherd fills her gaze. The constant object of malicious schemes, she knows not to yield even when engulfed in humiliation and utter failure to all earthly eyes. Yet, even as her most vulnerable members are falsely accused and slaughtered, she lives unvanquished and remains undeterred in her magnificent purpose until every drop of innocent blood is vindicated. 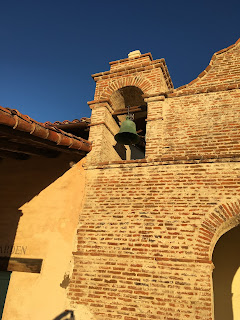 Consider this: countless of her conquerors now find themselves head bowed and kneeling before her Bridegroom. The blood of her witnesses evokes and conceives new life all the more that it is discounted and abused. Even as the world turns upside down, this Bride is ever confident in the Lamb that was slain for He is even more confident in her. This trust of the Bride protects the poor of spirit who take refuge in her. Thus, by the Fire that burns within her, Mother Church fiercely defies all worldly powers and rulers of darkness until terror overtakes them and the light of truth exposes the shame that they presumed would never be known. Here, repentance and the hope for humanity - ushered by fasting and welcomed by prayer, a chastisement that makes us whole because of the chastisement already suffered for our sake.

As she journeys in such saving brightness, she tenderly gathers in the wounded to heal and provide a little safe-harbor even as the harsh storm of secularism surges on every side. With words whose silent weight tip the scales in favor of the poor and humble, she sings canticles that reverberate farthest star of remotest galaxy with harmonies too beautiful for this world to hold. Reflected and magnified, Heaven's brilliant glory shines forth from her least movement, while with unrelenting determination she presses forward to what lies ahead.
Posted by Anthony Lilles No comments: