Newman: Disciplined pursuit of the Truth, Doorway to Friendship

The newly canonized St. John Henry Newman invites us to a discipline pursuit of the truth that builds up the world. His Idea of a University rings with this invitation. It is an invitation that we need to hear again today just as much as when it was first written.

Too often, we direct students to what is functional and useful, but we fail to set them free to engage a meaningful social life, one that blesses the whole community in which they live. We want them to get a degree, so that they can get a job, so that they can support themselves, so that ...  But we do not always help them ask the deeper questions about existence or help them cultivate hunger for the truth.  For Newman, the Catholic University has a much higher utility than simply career placement -- he wants lay faithful who are ready to engage the world, build society, live meaningful lives and witness their faith in Christ in a compelling way.

I was exposed to a genuine liberal education, the kind of Saint John Henry Newman writes about, during my years as an undergraduate at Franciscan University of Steubenville. In the mid-80's, I felt the frustration of many in that generation. We were born into economic good times. If we were a little suspicious regarding the free-love idealism of the 1970's, we were nostalgic and naive for its hedonism. Others saw us as cynical, reluctant to sacrifice for the common good. Enchanted with Star Wars, we had not learned to wonder over the real world before us and would rather escape than apply ourselves to engaging it. Laced with nihilism, this was the conventional attitude of the day, and I was locked in its drab narrow-mindedness even while I hoped for something more.

I believed in the Lord and loved Him. There were retreats and prayer meetings and courses on the Bible before I went to college. But the conviction that His plan would lead to real happiness or that the real sacrifice it required was worth it, I was not ready for this. Behind my lethargy, I was haunted by a desire to make a real, concrete, flesh and blood decision to step out in faith. I intellectually assented to this, but I was too lukewarm to put it into practice. It is in this social context that I had heard about this small Catholic school in Ohio and half-heartedly applied late in July. A month later, a group of upper class-men greeting me at the Pittsburg Airport and we shuffled off into a van speeding through West Virginian country roads, singing not John Denver tunes, but charismatic praise songs instead.

Something clicked in my first year.  One of my professors asked me what I wanted to do. Now, I profoundly admired this priest, Fr. Francis Martin. When he taught, I felt a deep desire for the truth burn in me and sometimes, this desire caused me to actually apply myself to my studies. To flatter him, I said I wanted to teach theology, like him. He asked about my grades and when I told him, he smiled. If I wanted to teach, he explained, I would need to apply myself much more and that this would require setting some new priorities in life. This was a lighting strike. His challenging words revealed to me a desire in my heart. Up to that moment, education had been a game, and not a real engagement with life. To actually teach, I needed to actually learn.

There was a gradual shift. Instead of studying because of a function that I wanted to perform in the future, I began to study because of the truth that I was confronting in the here and now. The motivation of becoming a teacher was eclipsed by something beautiful that I was discovering through study. Although I was blessed with many very good professors, in a particular way, Alan Schreck, James Harold, Mark Miravalle, and, most of all, Fr. Giles Dimock baptized my mind in wonder. Suddenly, I was no longer simply going through the motions, fulfilling minimal obligations. Instead, a fire was set and shadows of truth's splendor began to challenge how I lived and judgments that I had made about God, about others, about myself and about life.

What I discovered in St. John Henry's writings helped me understand all that happened at Franciscan University and to better appreciate the privileged opportunity that God provided in my life. In my senior year at Steubenville, I had the honor of sitting next to David Warner. He would be the future president of Our Lady Seat of Wisdom in Barry's Bay, Canada. At the time, he was not yet Catholic but, unknown to me, thinking about it.  David also was on fire for the truth, and because of our Central California roots, a friendship was born. Years later, after he and his family entered the Church, we collaborated together in Denver.  He was writing his dissertation of Cardinal Newman's understanding of Catholic Education. While on my own, I was never quite drawn to these writings, Dr. Warner challenged me to begin reading, and after David's difficult struggle with cancer and death, engaging Newman's ideas often reminds me of our friendship and some of our discussions.

Genuine Catholic Education is a privileged opportunity that can open to great friendships and the discovery of one's own mission from God. As the Academic Dean of St. Patrick's Seminary, I have come to see that Newman is right: desire for the truth demands excellent teachers, intense reading beautiful literature, clear focused thinking about difficult to grasp connections, and decent writing about the whole human experience, from its ancient roots to its most contemporary applications. This is a journey from a little knowledge about many things to a profound understanding of the most important things. Left to ourselves, we will never see those deep and meaningful connections that purify and advance society or even one's own private life. Yet, in a community bound together in pursuit of what is genuinely good, noble and true, men and women learn those arts of companionship and right judgment that help those with whom they interact flourish. This is as true for future priests as it is for the lay faithful.

Though I do not have extensive experience with the broader education of the laity, please allow me to end with a note about why St. John Henry's vision of Catholic Education is so important for the faithful today, so necessary for Catholic institutions to strive for.  We live at a time when the lay faithful are at the frontlines of the mission of the Church. The secular character of their vocation puts them in direct contact with those who would never hear the Gospel of Christ without their particular witness.  This witness belongs to the marketplace of ideas and the public square, the water cooler and the Board Room, on the field and in the stands, on the job sight and around the dinner table. 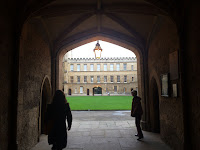 Some might object that the kind of education that Cardinal Newman advocates is not practical for an actual job and, therefore, a waste of time and resources.  Others question whether such an education really prepares men and woman for the real world. I can recall some who were dissatisfied with the Catholic education that they received at Franciscan. My heart is saddened also by some whose lives fell apart and did not meet with success. Yet success or failure in life is not the ultimate criteria. Many who fail are all the happier for having tried. As I consider my Steubenville friends, the ones who even in the face of difficult illness and reversal of fortune persevered in their faith, there is a deep gratitude for their beautiful families, their contributions to society, their lives of faith ... I am not sure that any other kind of education could have prepared them as well or better for the life that the Lord gave them to live.
Posted by Anthony Lilles