The Bells on Mt. Tabor

I started describing our pilgrimage from this summer - what we did each day from when we left on June 12 until our return on August 3. Unfortunately, memory follows its own chronology and the following event is out of sequence. But of our time in Israel, the memory of one moment is so strong, I need to write about it. In fact, it speaks to a certain aspect of prayer that is often overlooked. Prayer is sometimes greatly helped by symbols - not just signs seen, but also holy things heard and felt, sacred symbols like the music of church bells.  Obviously, a symbol points to something beyond itself, indicating a reality greater than it can contain.  A cross symbolizes Christ's work of redemption and the conquest of good over evil.  And although symbols are generally thought of in terms of things we see, when it comes to prayer, all creation takes on symbolic proportions, including sound and especially music.  So I plead your patience while I tell you about the bells of Mt. Tabor, which we did not hear on the second day of our pilgrimage but rather on the third. 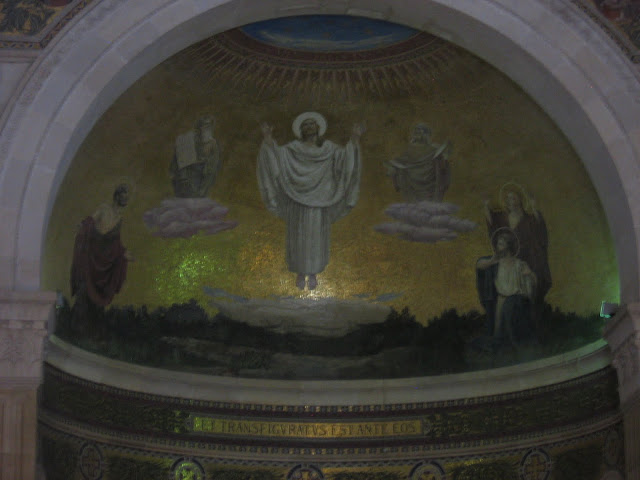 Mt. Tabor is the place where the transfiguration of Christ Jesus is traditionally believed to have happened. The very large hill overlooks the Valley of Megiddo, a place of biblical, historical and eschatological battles. Jesus ascended this mount with Peter, James and John. As he did this, light and darkness covered the mountain just as happened to both Elijah and Moses in their encounters with God. What is more, Elijah and Moses appeared with Jesus and they spoke together. Peter asked Jesus whether he could build three booths - perhaps a reference to the Feast of Tabernacles - the September feast by which Israel remembers that God had us live in tents when he brought us out of the Land of Egypt, the feast on which Solomon dedicated the Temple - God's dwelling place, the feast on which pilgrims would journey to the Temple to hear the law, the feast which according to Zechariah the Messiah would make universal for all peoples - the judgment day.   Jesus does not respond to Peter's request.  There was no need to build another earthly tent.  Jesus himself is a new dwelling for God and Man.  The messianic meaning of tents in the wilderness and the Temple of Solomon were fulfilled in Him.  The whole theophany revealed a great Christian truth about prayer: it is to Christ Jesus we go to know the will of God.  The voice of God came out of the bright cloud surrounding Christ and said, "This is my beloved Son. Listen to Him." 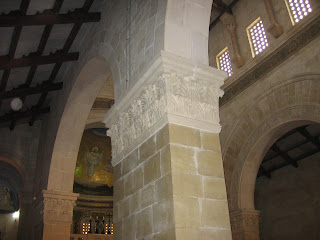 The Church of the Transfiguration is beautiful and so are the views from atop Mt. Tabor. Yet comes to my memory most vividly was not what I saw but what I heard: the explosion bells just as we began to descend the front of the church. The deep beautiful tones pealing over head physically resonated deep in the heart. Everyone stopped and let the tolling role right through them. It was an incredible moment of prayer.  It was the Angelus. Each resounding toll was a symbol of the voice of God, that voice echoing out to Peter, James and John - His voice that takes away fear and leaves one's heart in peaceful silence and adoration.

I was reminded of this experience today when I read this from Romano Guardini's Sacred Signs (Michael Glazier: Wilmington, DE (1979) pp. 89ff.): 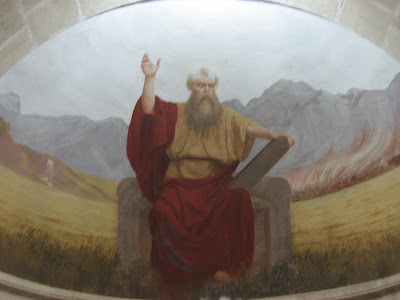 "News from afar, news of the infinitely limitless God, news of man's bottomless desire, and of its inexhaustible fulfillment. The bells are a summons to those "men of desire" whose hearts are open to far-off things. The sound of bells stirs in us the felling of distance. when they clang out from a steeple rising above a wide plain and their sound is carried to every point of the compass, and on and on to the hazy blue horizon, our wishes follow them as long as they are audible, until it comes home t us that there is no satisfaction of desire in far distant hopes, or indeed in anything outside ourselves. Or, when the pealing bells of a mountain-built church flood the valley with their clamor or send the sound straight up to the zenith, the listener, straining to follow, feels his heart expand beyond its usual narrow limits. Or again, the bell tones in some green glimmering forest may reach us faintly, as from a great distance, too far off to tell from where, and old memories stir, and we strive to catch the sounds and to remember what it is they remind us of. At such moments we have a perception of the meaning of space. We feel the pull of the height, and stretch our wings and try to respond to infinitude. The bells remind us of the world's immensity and man's still more immeasurable desires m and that only in the infinite God we can find our peace. O Lord, this my soul is wider than the world, its longing from depths deeper than any valley, the pain of desire is more troubling than the faint lost of bell notes. Only thyself canst fill so vast an emptiness."
Posted by Anthony Lilles