The Personal Presence of Christ the King

The personal presence of Jesus Christ the King reigns over the world even in its present turmoil. No one and nothing can thwart His plan.  The glory that He desires us to know in Him is ours, if we will believe in Him.

This King has taken His stand with all that is good, noble and true. Those who stand against Him oppose the glory and greatness of their own humanity. They have allied themselves with self-contradiction and already have chosen for themselves their own punishment. Yet, whoever would stand for virtue, nobility and kindness will find in the King of Glory the dearest friend. His reign is a mystery that contains and is contained by anyone who believes He is Lord and Savior.  Those who choose to enter into His reign find peace, a peace the world cannot give.

Indeed, the Lord Jesus, the Word of the Father, establishes peace in all things because He contains all things in Himself. He is before the whole cosmos in power and presence: there is no moment of time, no distance or space, nothing visible or invisible, no force of good or evil, no intelligence or ordering principle material or immaterial that comes before Him. Every creature comes from Him. They are, in wondrous ways, patterned after Him. In their very multiplicity, they are ordered to Him and express His immensity. His mysterious benevolence sustains the existence of everything that is - even the human person and the wonderful gift of freedom with which each member of humanity is endowed. Because He is the source who makes exists and directs all things, even the those things entrusted to the liberty of men and women, the peace that He brings allows all things to thrive, and this is particular true of mankind.

When it comes to the human person, Jesus Christ, our Just Judge, has also chosen to make Himself present to be known and loved in a personal way. The Word of God does this by not only containing our existence and making the use of our own freewill possible but also by freely allowing Himself to be contained by our hearts. He suffers with us all the threats to our integrity so that we do not suffer alone, and He preserves the most precious truth about who we are and where we belong, even when we believe that we have thrown it all away. Our own free willed acts of devotion are endowed with eternal meaning in His eyes - because He is the One who makes them possible for our sake. This makes Him an intimate player and principle actor in the drama of good and evil that unfolds in our hearts. When it comes to the battle for our own integrity, He has taken our side.

With great hope in the goodness by which we were made, the One who is just and true speaks to us so that we might realize the victory of good over evil in our own conscience. Each time this Eternal Word communicates in the passing silence of our hearts, He gives Himself with the desire to hold nothing back, including the secret judgments of His own heart. Those who quickly confess their sins and seek His pardon know this to be true. He wants to share with us the deep things of God, truth hidden in the abyss of divine wisdom, that the judgment of our own hearts might stand unveiled and become vulnerable to His love.

He has won the right to do this by giving Himself on the Cross, and we grant Him permission to do this when we approach that Cross with gratitude, ready to take up our own. Every time we renounce our selfishness, He cultivates His own selflessness in us. Here, we anticipate that final judgment that will be rendered about our lives at the end of time. Before His judgment seat, if we are open, He pours out his fullness into our lives in exchange for our own poverty -- and He longs for us to entrust Him with our very misery so that He might make known to us His invincible mercy.

He does this, first of all, because He knows and loves each of us in a very particular and unrepeatable way. We are actually dear to Him - worthy of every inconvenience and sacrifice, He cannot rest until He finds us and leads us to our true homeland. Indeed, He has cast in His lot with us in the great cosmic conflict with evil. Entering into our plight, He has accomplished, once and for all, the definitive victory against every principality and power that would threaten human dignity or seek to diminish its most high calling.

He did this by entering into our humanity, to embrace and  sanctify the whole of human experience, from womb to tomb. Whatever is ignoble and self-contradictory, he destroyed by His death on the Cross. Such evils only hold sway to the extent that we will not surrender them to Him. Whatever is true and good in our humanity, He saved and raised on high. In His resurrection, He trail blazed a new frontier for humanity, a horizon that stretches even further than death, to a fullness of life completely beyond our powers to grasp or estimate.  This is the way that is open to us if we will accept His reign over our lives.

In the Kingdom of Christ, He rules through and with Mystical Body. Whether by the blood of the martyrs, the contemplation of the ascetics, or generous work of His servants, the loving obedience of His mystical Body constantly expresses His reign in the most concrete and existential ways. Not in mere ideas or intentions, not in mere feelings and fantasies, but in those hard won actions of faith and love, the good and beautiful work of the Lord is manifest. The reign of God is not about unaided human industry, but rather surrendered obedience to the love of the Father. This is the rule of the Lamb who was slain. In all its sublimity, it is found not first of all in great feats, but in those hidden and patient gestures of every day life: a cup of cold water, a smile, a soft answer, an understanding glance.

What would seem pure weakness to the world and an inconvenience is nothing short of a mystical new birth in the reign of Christ. He is ready to act in every contrite acceptance of responsibility, every sincere effort to be reconciled, any attempt to relieve the suffering of my neighbor. No matter how feeble, sacrificing one's own pride and comfort matures into amendment of life, restitution of wrongs thought to be impossible to heal, penance so loving that Christ is able to take delight in its gratitude and sincerity. 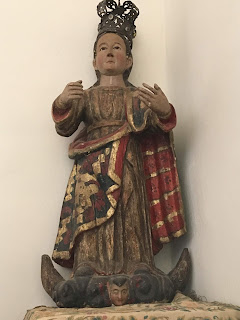 This opens into a whole wilderness of new actions of life and love waiting to be explored by the human heart -always together with and for Him. Each here and now, nitty gritty sacrifices made for the love of God and for those who are entrusted to us gives this reign the space to draw us into Him even more -- building up His whole Body with such splendors as no one in this world has ever seen before.

If through His mystical Body, His reign contains and is contained by each one of us through our faith in Him, a certain new unity is established among all of us - in and through Him. Righteous and True, He is already closer to us than we are to ourselves - even if we are indifferent to or doubtful of His presence. In this Kingdom, the closer we draw to Him, the closer we are to one another. He implicates us in one another's plight until we are able to bear each other's sufferings and uphold each other's dignity. If not even death can separate us from the love of Christ and we are all bound together in this love, then this unity is not something that the futility of this world can diminish. Instead, all the limitations of our present life are, by faith in Him and the unity of his Mystical Body, already being transformed into new moments of eternal life.
Posted by Anthony Lilles