The Suffering Love of the Savior

The love of Jesus saves because it has the power to bear away sin. The witness of the Holy Innocents shows us that the powerful of this world do not have the final say about humanity. At the end of the day, no matter how much violence is unleashed, Christ's saving love will raise up the lowly and the powerless - even if they are as helpless as infants and children. Because of Christ, they suffered, but because of Him, they testify to something good and true about humanity - that the most vulnerable of our society to not admit of being used as a means to and end, that those who do so will never thwart the plan of God. For the saving power of God is greater than the power of evil. 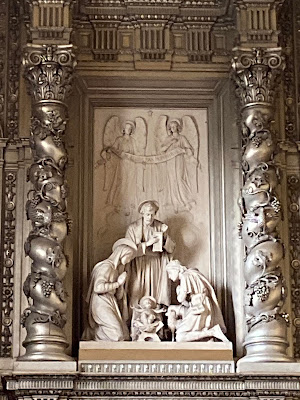 If the Savior has so much power over the affairs of the world, what about the movements of the heart? No disordered affection can withstand the heat of Christ's love and this suffering love burns away all impurity of a soul until only the truth remains. Because this love comes from the Father, the suffering love of the Savior makes us just. That is, when we allow this love to burn in us, it gives us standing before the Lord. Enchantments, intoxications, false teachings, myths - none of this can stand before the presence of this burning fire.  All that is left is the truth of who we are.

There are those who hate the truth. They would rather their false teachings and myths. So they run into different kinds of enchantments, one after the other, until they exhaust themselves in self-contradictions. Still, His love burns, ready to do its work of restoration, purification and transformation - if only they will turn back to Him. No matter how far someone seems to have gone, the way back is as close as a prayer of the heart.

This divine love restores integrity by overcoming our lack of integrity. It untangles self-contradiction by aligning our being with the truth. It heals wounds that seem impossible to heal - not only those that life throws at someone, but also those that we have caused those we love. Such is the saving fire of Christ's suffering love.
Posted by Anthony Lilles