Dare We Go to Mass?

Dare we go to Mass? We are told that somehow not going to Mass in times of crisis is the most responsible and heroic thing we can do. Patronizing authorities assure us that this prevailing premise should not be called into question or else we are labeled fideists. And no one wants to be considered simple minded or fanatical. A host of experts would have us forgo liturgy because the singing might kill us and partaking of the Bread of Life might spread death. When we attend, we are ordered to cringe behind masks, at alienated distance from one another, cow-towing as if we should not be bold in our worship of the Risen Lord. Its Abitene 2020, yet unlike those young African martyrs of early Christianity, our post-modern hearts do not ache with the realization, Sine Dominico non possumus (without the Lord's Day, we cannot go on).

Why is Mass so necessary in the midst of pandemic and societal collapse? In dystopia, would it not be safer to worship in a more socially acceptable, even entertaining way? After all, instead of braving death to hear homilies about seemingly antiquated moral systems, social media provides designer deities who confirm the current think of the culturally hip. Who needs priests to offer mass when health officials and celebrities are the real mediators of human salvation? Or bishops to teach when a community organizer is able to offer a more politically acceptable word of hope? Or a pope to safeguard divine truth when any university sociologist can shame us before the herd's more accessible and relevant superego? Let's face it, fanciful though it is, this ideological idolatry makes one feel mighty: subordinating our dignity to the latest fetish saves America from evil politics, humanity from pandemic, and the world from pollution.

Unlike the Mass, these psycho-socio agendas never deal with any true challenges to one's own mediocrity. Rather, some social prophet provides a scapegoat, one opportune enough for social media platforms, such as any saint or father figure with a public statue. The self-serving inconsistencies of these agendas are rarely called into question because they distract from one's own (painful) self-contradictions. Not dealt with, the interior cacophony of anxiety and rage surges out against the weak and powerless -- and it is precisely for such as these that, the night before He died, the Lord made Eucharist.

When one is bereft of worship that is right and just, what opportunities for manipulation our current agreed upon religious incoherence presents! Yes, the worship of designer deities inevitably leads to that singular form of oppressiveness that only narcissique self-satisfaction can attain. The burning of churches is often replaced with killing the Christians who worship in them. Despised more than any other institution, most of all by those who are themselves Catholic, attacking the Church is lauded as some enlightened moral obligation. St. Junipero Serra statuary has not only been defaced with the triumphant approval of media and political personalities, but those indigenous communities who are grateful to him for bringing the Gospel of Christ are not so discretely ignored in the public square. And so we live in the echo of "Crucify Him!" Could it be otherwise? When progress is limited to idolatrous sensibilities, it cannot not long suffer the truth, especially when truth confronts one's own self-loathing emptiness. Only the coming of the Eucharistic Christ provides an antidote for such misery.

With Catholics failing to stand together for the salvation of the world, it is not by coincidence that we now live in climate of moral oppressiveness spiraling into open religious persecution. Rooted in systemic manipulation, all different forms of bad religion appeal to the imagination of both oppressor and oppressed -- and as long as one lives in this dream of alienating shame, one never is woke from the dynamic of suspicion, accusation and blame. Without the Word of the Father to lift up our hearts, one's own empty boorishness is deaf to the cry of my brother's blood to heaven. While we blame each other about the pandemic or bigotry, a pathway for meaningful discourse is overshadowed by myth induced malice. It is to help humanity escape this labyrinth of anxiety and despair that Catholics must go to Mass. 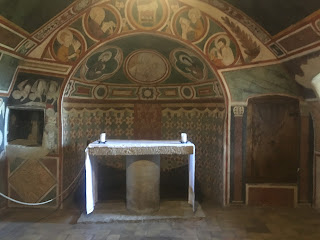 We go to mass for the saints. These are the selfless few who put their lives on the line so that we might enjoy blessings we ourselves did nothing earn. To be indifferent to their memory is to be ungrateful to God. These saints are a sign of hope, reminding us that what is noble is also worthy of the sacrifices we share as a people. The Sacrifice of the Mass makes their sacrifices present to us again.

We go to Mass for the poor and vulnerable. The Crucified God has chosen to disguise Himself in their plight - and without the Mass, we can never recognize Him. These poor are especially loved by the Lord and our solidarity with them in their weakness reminds us that before God, no matter how blessed, we are all in need of a savior. When we lift up our hearts together, the most vulnerable member of a community is never a social problem to solve, but a neighbor to serve and a friend waiting to be made.

We go to Mass because, contrary to the prevailing voices of demonic accusation that echo within the limitations of idolatry, our Christian faith teaches us to believe first and foremost that we are not condemned but forgiven, and at a great price. Thus, defense of human dignity and a dignified way of life flow from what God yearns to give us when we come together to worship.

To go to Mass is to stake out a claim that will not, come what come may, ever condone boorishness - no matter how wrapped in indignation. In Christianity, there is no proletariat who can claim innocent victimhood - before the Cross we are each of us judged as thieves and liars. The blood of Abel is on our hands. Yet before the Cross to which the Mass brings me, I also see, in the very face of all my self-contradiction, there is truth - and this truth raised up on the Cross has taken the form of mercy. Mercy is more powerful than any unjust system or effort at social manipulation. Going to Mass unlocks this unconquered power, participating in the Eucharist opens floodgates of astonishing wonder and confident sharing in Christ's great sacrifice unleashes torrents of Divine Glory on the world.

In the Mass, I stand as a child of the Most High God. Before the immensity of His Love that has called me to true worship, I find the courage to work for reconciliation and to believe in the power of kindness even more than the threat of a disease. Not worthy that the Lord should enter under my roof, I accept responsibility for what I have done and failed to do, and as Christ calls to me at Mass, I climb down from my pride to repair what damage I can out of devotion - for He desires to sup with me. At Mass, I give the Lord the opportunity to heal broken situation that we call the world. Even more, as I approach the altar, I find the courage to forgive the debt that I hold over my brother ... for however great it might be, a greater debt was paid for me.