Faith comes by hearing, but who are we listening to?  On my own first visit to Holy Transfiguration, this question rang through me.  After a difficult experience in formation with another community, I was looking for someone I could trust.  Abbot Boniface had founded a Byzantine Monastery in Redwood Valley, California, and someone suggested that I meet with him and seek his counsel. I wondered whether this would be a man I could trust and deeply hoped it was. 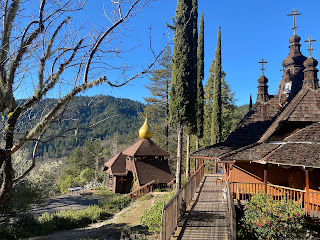 There is a crisis of fatherhood in the Church today, and our young people are paying the price.  In a culture where fatherhood is mocked and men are not encouraged to be strong, it is countercultural and even counter-intuitive to make such an observation.  Because we do not cultivate or honor fatherhood, the body of Christ is often lacking this essential gift,  an irreplaceable mediation of the grace of Christ. Many ecclesial personalities suggest that they know Christ and may really believe that they do, but few know how to be spiritual fathers. There is little in our culture that encourages the cultivation of such manhood. So many, often without realizing it, project their own fancies onto Jesus instead - blind to true Light, we do not see rightly - and this is especially true of men who lack the courage that real fatherhood requires, who lack the conviction required for sacrificial love. Because they have never learned to be sons, they do not know how to be fathers.  Blind themselves, at best they can offer only inaccurate guesses about God's will and uncertain encouragement to vague ideals.

A true spiritual father, on the other hand, is able to see. Having learned to be a son, he knows how to contemplate, how to behold reality with confidence.  He is able to listen in a manner that makes his whole being vulnerable to God - humble trust and obedience to the heavenly Father opens up such contemplation. He lives in gratitude because he knows that such vision has been bought for him at the price of Christ's blood, and the freedom he now has to see is something he refuses to take for granted.

Because Jesus is the Word of the Father, we need men, such as these spiritual fathers, who will help us find the Lord so that we might learn how to live.  We need another to help us welcome "the Light" who was "from the beginning." Someone beyond ourselves needs to speak the Word into the whole of our humanity until everything human about us - our entire image and likeness to God - is translucent with the Light of Christ.  Such is the role of a spiritual father: this man listens souls into being because he himself "keeps" the Word in his heart.  Because he has welcomed the Light that shines in the darkness, he can listen to the suffering ache in this particular son or daughter. He can listen until he enters the aching truth of another - and because he yearns to unveil to them what they cannot see on their own. The light of Christ is mediated through a spiritual father who listens.

When a soul humbly seeks help, a true spiritual father tunes into this particular “end point” in eternity and carefully discerns this soul’s unrepeatable role the great symphony of creation.  In order to realize such greatness - a soul needs to be taught to see, needs to be listened to, needs to manifest its pain to someone who will fight for it, protect it, and help it become what it is meant to be.  In the order of nature, this is the work of a father - in the order of grace, this is the completely unmerited privilege of a spiritual father. In my case, I was encouraged to study theology in Rome and to become a teacher, but to do it as an act of faith. This was just the word I needed at the time, a spiritual direction even as I felt I was wondering aimlessly.  I had a sense for how to serve God and confidence in the goodness of His work in the world.

Confidence, purpose and sense of identity is what Abbot Boniface offered me when I came to first came to Mt. Tabor.  It is the very purpose that he founded Mt. Tabor - and when he offered it, the stream of spiritual fatherhood he chose to sanctify this mountain flowed from the caves of Kyiv.  Indeed, as is the case of Ukraine, this monastery is at the head waters of the Russian river, looking out over lands once claimed by Russia. Just as faith flowed from those caves of Kyiv into Russia, so too does faith flow into California from this vantage point.  The caves of Kyiv received the grace of monastic mysticism from Constantinople - and this heritage drew from the deep dug wells of desert fathers in Egypt. This great heritage found expression in the life of St. Symeon the Studite - who in turn formed St. Symeon the New Theologian. This happened at about the same time that Ukraine was first accepting the Gospel of Christ - and through this acceptance, the Russian people were evangelized by a monastic Church - a Church of spiritual Fathers.  California in all its rejection of fatherhood and hatred for actual men needs a new evangelization -  one that can only flow from spiritual fathers and the monastic tradition.

The great calling for Mt. Tabor is not simply to be a shelter in the storm of secularism - but, as were the monasteries of Egypt, Constantinople and Kyiv, a school of spiritual fatherhood, a place where one can be a spiritual son, a place where men show one another the Light as brothers. It is not an ideal of "Prayer and work" but of "prayer and family" - of sobernost, solidarity, a union of hearts forged for the glory of God. Glory waits to be revealed by those who will seek the Son of the Father.  For St. Symeon the New Theologian, one learns to see the Light of Christ through the mediation of a spiritual father — one needs a spiritual father to see the immaterial light of Trinitarian glory.  Since the time of Abbot Boniface, Holy Transfiguration Monastery has helped form such men - and this is true even now.