The smell of smoke and hazy horizon aglow at night evoke wonder over what God is doing. A fiery sword looms over a once indifferent and indulgent coastline as firefighters and first responders fight against impossible odds. There is goodness in the heroism that such sacrifice unveils, and, for many, this has become a time to pull those who we cherish a little closer, to give thanks for such blessings that we do not deserve. Still the questions: is God angry with us and have we fallen out of favor with Him? It is a biblical question that Saul did not grieve enough before the Lord and that David wept so bitterly that only God could comfort him. Our hope is hidden here. Deluge and Fire are symbols of Christian initiation - for Christ has changed the punishment of death into a threshold for eternal life.

We ought to feel ill at ease before the Face of Love. A certain fear should grip us who otherwise self-reliant have failed to question the false security we take in our enchantments.  The arrows we let fly by day in the form of calumny and heartless accusation fall under the shadow of our Judge. Love is not ignorant about our efforts to pin on someone else the responsibility for the dis-ease that infects those dark places of our hearts. Love knows that we fear bearing the weight of responsibility for what we have done and failed to do.  Love knows the dignity that we have stolen from our neighbor through indifference, and this Judge of the Living and the Dead is never indifferent to our plight. He knows that however much we have wounded our neighbor and left him for dead, we have wounded ourselves even more and He will not abandon us.

God is Love and Love is Fire. The standard of burning Love measures that quaking rancor that shakes ground from under foot while offering footing only on perilous peaks of righteous indignation.  The Divine Scale with its very warmth weighs those celebrations of rage that expose envy's wound, and Love's eternal brightness illumines that cavity of covetousness broadcast with shameless satisfaction. Ever attentive, Love gathers as a storm, never deaf to the constant drumbeat of dread filled stories meant to paralyze until deadly specters haunt every gathering, ready to strike when least expected.  Not indifferent, thunder in the skies recall how Love also weeps when the most vulnerable are traded as ponds in nihilistic games, discarded and despised for not being more useful in the latest social engineering experiment. When self-satisfied arrogance seems to have destroyed all that is noble and true, Lighting reminds us that Perfect Love rectifies humanity with sudden but sobering shock and awe until ablaze in the hearts of heroes, He rescues the oppressed from their plight. 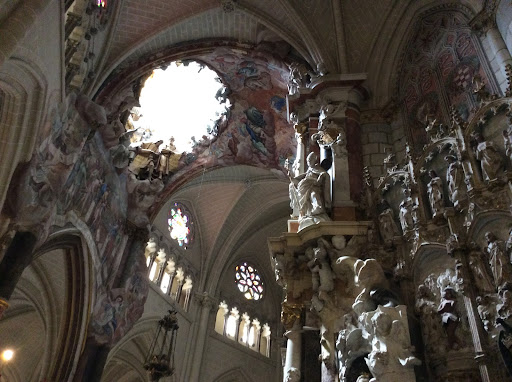