The Best Wine for Last

Feeling abandoned by the Church, many wonder over the plight of humanity and the promise of the Gospel. Some priests and bishops remember the tradition passed on to them and they dare, even in the face of incoherent policies, to build an island of humanity and to raise the standard of love. The miracle of Cana flows from these celebrations of eternal thanksgiving, not despite, but because of such suffering. The Church is born of loneliness - man's loneliness is an echo of God's loneliness for man.

There have been moments of intervention when Merciful Love is experienced as a kind of divine wrath. If this is one of those moments, then it is time to take stock and allow Christ to question us, to ask "Where are you going." To respond to His initiative is already to begin to come to our senses.  Indeed, history also shows that whenever a people turns back to the Lord, He unleashes blessings that could not have been anticipated, for He gains nothing when we are lost, but is filled with boundless joy when He glimpses us though we are still a long way off.

Eternal love binds itself to a child's plight. Made to reveal the hidden glory of the Uncreated Light, the child may choose a darkness that cannot bear its brightness. For lack of truth, integrity is compromised and self-contradiction inevitable. For such as these, Love flames forth seemingly to blind and burn, but ever triumphant over evil, this warning reveals the way out of tragic ruin.

In shipwrecked loneliness, adrift in myths and falsehoods, we sink below waves of chaos and exigencies of the moment. Yet, there is One who the dark forces of life cannot pull under. The deep primordial threats to existence haveno claim on Him for He has already descended to vanquish their strongholds. Unvanquished, He comes by word and sacrament to pull us up with Him, to follow where He leads.

Where the Bridegroom leads goes far beyond any unity of hearts that is neither fruitful nor unto death. He beckons to a cellar where the best wine is still waiting, where we each are awaited, a place of consummation where mutual recognition is finally fully realized. Relying on an emotional crutch, one can never ascend the magnanimous heights alive in His indissoluble embrace or sound those terrible depths flowing with His very life.

Thus, as one is given over to prayer, tender power tears us away from selfish alliances to make room for a more fitting love, like weeds pulled from around a rose.  Such a loving touch shatters only to set free. Its hurts only to heal. What seems as stern as death unleashes astonished encounter, unexpected fecundity.

Homecoming, holy inebriation, jubilation and an overflowing heart - all at once in forgetfulness of everything, all else left unknown, but that gaze of love. Fire has ignited a living flame and aglow, darkness loses its hold. Life cries out of the silence and the smile of birth reaches a new mother's tired eyes. 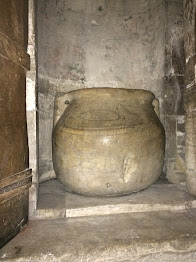