Islands of Humanity and a Kneeling Theology - Refuge Against Therapeutic Technocracy

A kneeling theology, that is a theology rooted in prayer, is vital to the renewal of the priesthood and the Church. What it requires is a deeper dedication to the renewal of our minds. Specifically, this dedication is marked by a renewed pastoral concern over the plight of our contemporaries as well as a greater openness to the ongoing conversation with God to which each is called. Such theology can become a vibrant expression of our devotion to the Lord and a conforming of our intelligence to His saving mission in the world.

Conventions once supported theological approaches that were without regard to prayer or pastoral charity.  We no longer have this “luxury.” The Christendom of Western Civilization is shipwreck in a storm of secularism. We have allowed technology to suck life out of our souls. For all our social networking, we are extremely lonely and disconnected from one another. Such loneliness inevitable takes hold when men worship the work of their hands – and, indeed, technology, especially medical technology, is raised up as the new god. If we view physical disease as the greatest threat to humanity and believe that medical technology is the only thing that saves us from this evil, we are already worshipping at a false altar. When falsehood alienates us, loneliness crushes us.

This alienation has also affected the Church spurring destructive sectarianism and a certain coldness toward one another, especially the most distressed. Instead of hope and courage, a spirit of accusation and complaint grips our hearts. Instead of loving the shepherds that Christ has given us, we allow our hearts to be turned against them. The faithful feel abandoned and alone, but polemics that stir up anger do not address the crushing loneliness that pierces the Heart of Christ.  To overcome this dehumanizing loneliness, the resources of the Church must be dedicated to building safe-havens, islands of humanity in which believers can support one another in witnessing to the Risen Lord. It is to this great task, that of building islands of humanity, that a kneeling theology contributes.

Hans Urs von Balthasar understood this and tried to build a community of those who would consecrate themselves to being just such an island. He did this believing that even if last vestiges of Christian culture have passed away in our post-modern society, our Christian faith has not. His example, and the example of his community remind us of the love of the Risen Lord at work in the world when we most need this reminder. The love of Christ compels us to holy friendship and mutual concern even as a growing technocracy threatens religious freedom and makes absolute claims over every social interaction.

We have come to believe, if it can be done, we must do it, because whatever we can do (in the name of science, public health or a political agenda) must be good. But our hearts know better.  We are deluded into believing that what divides us can be overcome by manipulating how we communicate. We have seen how a fluidity in meaning and narcissism coincide.  Deep down we know that it is not a lack of technology or science that divides us. We live with the gnawing realization that we are divided one from the other not because of failures how we relate but because of failures in being human. Humanity has never had such great power to relate, but it has never been so far from itself, and the more we entertain ourselves with information, the more this self-alienation haunts us. 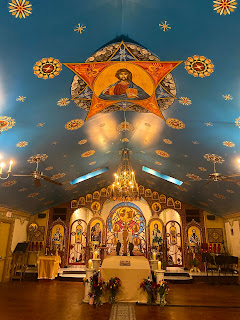 This is because the technology that we adore is about doing, not about being. We "do" the therapeutic even at the cost of being human, because "doing" does not require surrender to the mystery of God or the mystery of being human. It gives a sense of control - and we feel out of control, so we grasp for our masks and feign disgust when our neighbor dares show his face.
Technology is a kind of knowledge living at only the periphery of human existence. It is a decorated face mask. It might ape the things of the heart, but it can never replace the encounter that happens when heart speaks to heart - and so without the heart, the techno-therapeutic only frustrates the meaningful communion we are meant to know with one another.

Islands of humanity must be built.  If we are shamed into paying compliant homage to the latest politically expedient fashion, we also feel convicted by the truth that life must have a deeper purpose. This is the voice of God that prayer knows, and it is the task of theology to help souls listen to Him.

Conflicting cacophonies of woke and racist, progressive and conservative, left and right, oppressed and oppressing, haves and have-nots (and each heart knows all of this more or less because sin can only divide) must not be allowed to silence the Gospel of Christ in our hearts or in the public square. But by the words of a preacher and the power of the Holy Spirit, every political and cultural tyrant will bend the knee to the self-emptied, humbled, and crucified humanity of God. Just as has been true in every age, to do more than merely survive, indeed, to thrive people need to hear those echoes of the eternal sanctus in times such as these as well - with physical, flesh and blood, contact with the Holy One and His Mystical Body.

Amidst all social tension, anxiety, and distrust, the love of Christ compels us to find a way to bring a word of hope to those who ask. True prayer is not indifferent to this plight. Real theology does not ignore the needs of our neighbors.  Prayerful study, love inflamed reason, a kneeling theology guides the Christian mind to address this crisis in compelling ways.  It is about living with power over sin rather than under the power of sin. It is about sin born away and sin's matter transformed by mercy into the matter of eternal life.  It is about daring to enter into the sanctuary of the heart and allowing it to be set ablaze with the love of God. No disease, no mask, no technology, no ideology can cage such freedom and the fellowship that this builds is far greater than wreckage left by the weapons, polemics, or political power plays.

Prayer and adoration of God is the starting place for welcoming the love that alone answers the great problems of our time. Beyond the power of technology, St. Teresa of Jesus calls this a conversation with God and His personal presence. Beyond our own doing and industry, St. John of the Cross describes a Living Flame and the unvanquished coming of the Bridegroom.  Beyond what we can grasp, St. Augustine describes this as coming from some place deeper the innermost depths of human existence and surpassing its greatest heights. Beyond every argument, St. Thomas Aquinas teaches the relationship of theological wisdom of study and the mystical wisdom of prayer. The call to this kind of kneeling theology means to pursue theological formation that is born in this wisdom, leads to it and is animated by it - for this wisdom beyond builds islands of humanity on whose shores the sacred truth of our existence is protected and made known.